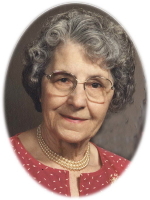 Catherine Edna (Fromm) Book, the daughter of Jacob Louis and Anna (Hoffman) Fromm was born June 2, 1911 near Defiance, Iowa. She died on Wednesday, June 4, 2008 at Elm Crest Retirement Community in Harlan, Iowa attaining the age of 97 years and 2 days.

Catherine attended school in Defiance. She married Alphons Antonius Book on July 16, 1929, at St. Peter’s Catholic Church in Defiance, Iowa. The couple farmed near Defiance for three years. They then started the Locker in Earling. One year later they sold the locker and moved to Witchta, Kansas where they built airplanes during World War II. In 1942, they moved to Detroit, Michigan and worked at a factory for 17 years. Spring of 1960 they moved to a farm near Defiance and farmed there until the spring of 1973 at which time they sold the farm and moved into Harlan. Alphons died on July 26, 1989. Catherine moved to the Elm Crest Retirement Community in April of 2005.

Catherine was a member of the St. Michael’s Catholic Church in Harlan and had been active with the St. Michael’s Guild there. She enjoyed doing crafts. She collected and polished stones, decorated saw blades, crocheted hangers and afghans.

Catherine was preceded in death by her parents, a brother Alfred at two weeks of age and her husband Alphons. She is survived by numerous cousins and friends.