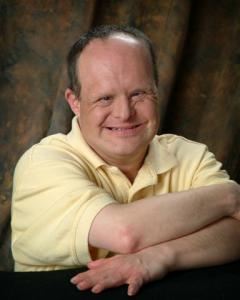 Lawrence Victor Rosmann, the son of Raymond Joseph and Ellen Marie Mertens Rosmann, was born on April 9, 1954, in Harlan, Iowa, and was raised on the Rosmann family farm near Westphalia, Iowa. Here, he liked to explore the outdoors with Lassie, the family dog. Larry attended Special Education classes in the Harlan Community Schools during the early years of that program; he continued to attend until he reached the age of 21. He was then active in the Concerned, Inc. Sheltered Workshop and Adult Daycare programs, where he took pride in helping deliver Meals on Wheels and printing napkins. Larry was a resident of the Country Care Center near Harlan for 24 years, where he acted as the unofficial greeter, making sure everyone shook hands. In January, 2008, he moved to the Little Flower Haven Nursing Home in Earling, Iowa.

Larry was a member of St. Boniface Catholic Church in Westphalia, Iowa, where the History Room in the new Parish Center is named in his honor. He loved music, especially the music of Lawrence Welk and Guy Lombardo. Annually, Larry celebrated the Christmas season by serving, along with area children, as Guest Conductor at the Harlan Community High School’s Christmas band concert. Sister Brendan Block, SSSF taught Larry a pure and simple faith, “All for Jesus.” He will be remembered for freely sharing his smile and “Excellent Joy” with all he met.

Larry was preceded in death by his father, Raymond Rosmann. He is survived by his mother, Ellen Rosmann of Harlan, Iowa; three brothers, Joseph (Jinda) Rosmann of Bellevue, Washington, Michael (Marilyn) Rosmann and Ron (Maria) Rosmann, all of rural Harlan, Iowa; seven nieces and nephews; the Vakulskas family whom he came to love; and his many friends at Country Care Center, the Little Flower Haven, and those in the Shelby County area.

Mass of Christian Burial was held on Tuesday, May 13, 2008, at St. Boniface Catholic Church in Westphalia, Iowa. The Rev. John A. Vakulskas, Jr. of St. Mary Catholic Church, Alton, Iowa, and St. Anthony Catholic Church, Hospers, Iowa, was the celebrant. Gloria Schmitz served as the organist and Mark Rosmann was the trumpeter. Casket bearers were David Rosmann, Daniel Rosmann, Jon-Michael Rosmann, Joe Mahlberg, Joseph Rosmann, and JoAnn Hodapp. Burial was in the St. Boniface Cemetery in Westphalia, Iowa. Memorials may be made to the Country Care Center, Inc. and Concerned, Inc. The Burmeister-Johannsen Funeral Home in Harlan was in charge of arrangements.