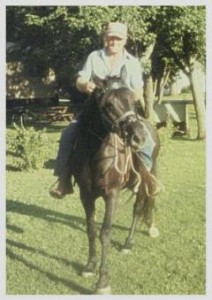 Roscoe Harold Buck, the son of Roscoe August and Lillian Katherine (Matthiessen) Buck, was born on February 25, 1930, in rural Panama, Iowa. He was one of eleven children. On June 16, 1931, when Roscoe was only a year old, his father died. The family moved to Shelby, Iowa, in March, 1932, where Roscoe attended the Shelby school. He then worked at the Avoca (Iowa) Alfalfa Mill and farmed. On October 18, 1952, Roscoe married Loretta Mae Fries at the First Presbyterian Church in Shelby. From December 10, 1952 to December 9, 1954, he served in the U.S. Army in the Korean Conflict. Following his discharge, he returned to farming and also worked many other agriculture-related jobs in Harlan, Iowa.

Roscoe enjoyed being around horses and was a member of the Shelby Saddle Club. He took his horse, Queenie, and antique buggy to many parades. He also liked antique John Deere tractors. Roscoe cared for a large garden, and tended many cattle and horses through the years.

Roscoe H. Buck died on Thursday, May 8, 2008, at Creighton University Medical Center in Omaha, Nebraska, having reached the age of 78 years, 2 months, and 13 days.