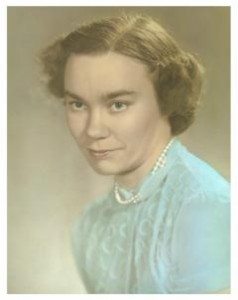 Norma Mae Andersen, the daughter of Harold Christian and Alta Elma (Lee) Andersen, was born on April 7, 1930, in Harlan, Iowa. She was baptized at the Immanuel Lutheran Church in Harlan on September 14, 1930. The oldest of eight children, Norma attended Country Schools #6 and #3 in Monroe Township, Shelby County, Iowa. Following school, she helped care for her Grandma Lee and Grandpa Andersen. In May, 1962, Norma began working for Oscar Bauman, following the death of his wife. She kept the house and raised his three children, Darlene, Linda, and Dan. She continued in this capacity after Oscar’s death, loving and caring for the children as though they were her own.

A lifelong Harlan area resident, Norma was a very giving individual. She enjoyed doing jigsaw and word find puzzles, as well as spending time tending her vegetable garden and canning the produce.

Norma M. Andersen died on Wednesday, April 30, 2008, at the Woodlands Rehabilitation Center in Council Bluffs, Iowa, at the age of 78 years and 23 days.

Norma was preceded in death by her parents; one brother, Donald Andersen; two sisters, Marvel Gries and Ardith Bivens; and two nephews. She is survived by two brothers, Darwin “Dick” (Karen) Andersen of Harlan, Iowa, and Wayne (Mary) Andersen of Knoxville, Iowa; two sisters, LaVonne (Fred) Fox and Lois Gordon and special friend, Bob Dickinsen, all of Harlan, Iowa; three children whom she loved as though they were her own, Darlene (Terry) Jacobsen of Council Bluffs, Iowa, Linda (Greg) Neve of Harlan, Iowa, and Dan Bauman of Valley, Nebraska; her nine “grandchildren”; eight “great-grandchildren”; nieces and nephews; and other relatives and friends.