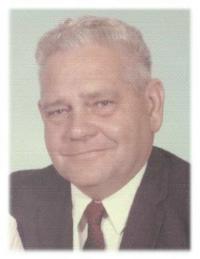 Howard Wilburt “Curley” Pedersen, the son of Elmer C. and Jenney E. (Norgaard) Pedersen, was born on February 20, 1918, in Casey, Iowa. He attended school in Defiance, Iowa, and Harlan, Iowa. Howard served in the United States Navy from 1941-1946, and spent most of his service time in the South Pacific. After his discharge, he returned to Harlan where he worked as a custodian at the Harlan High School for fifteen years. Howard then spent seventeen years employed as a custodian at the Harlan Post Office; he retired in 1978.

On November 9, 1963, Howard married Marie Anna Nielsen in Blair, Nebraska. The couple made their home in Harlan. Marie died on December 18, 1996, in Earling, Iowa.

Howard was a member of the Immanuel Lutheran Church in Harlan. He also held memberships in the Harlan VFW Post 941 and the Helmer Reyelt AL Post 150. Howard liked to read the National Geographic magazine, feed squirrels, and travel to visit and dine out with family. He truly loved telling jokes and riddles. His favorite saying was, “I only like two kinds of pie, hot and cold.”

Howard W. “Curley” Pedersen died on Tuesday, April 22, 2008, at the Elm Crest Retirement Community in Harlan, Iowa, having reached the age of 90 years, 2 months, and 2 days.

Howard was preceded in death by his parents; his wife, Marie Pedersen; one sister, Laura Mae Larson; and two brothers, Charles Pedersen and Richard Pedersen. He is survived by one step-daughter, Jean (Jerry) Aukland of California; one sister, Bernadine (Virgil) Wiley of Manilla, Iowa; four step-grandchildren, Michael Aukland, Diane Conklin, Janet Berry, and Peggy Ridley; seven step-great-grandchildren; nieces and nephews; and other relatives and friends.

Funeral services were held on Saturday, April 26, 2008, at the Immanuel Lutheran Church in Harlan, Iowa, with Pastors Steve Chellew and Heather Ploen officiating. Casket bearers were Gary Wiley, Marvin Gross, David Pedersen, Don Schmidt, Alfred Gomez, and Charles Warner. Burial was in the Harlan Cemetery, Harlan, Iowa. The Burmeister-Johannsen Funeral Home in Harlan was in charge of the arrangements.