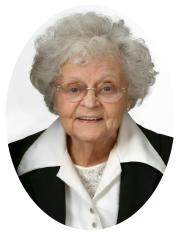 Darlene Doris Luxford, the daughter of Ernest C. and Anna C. (Easton) Fuqua, was born on January 1, 1923, in Fairfield, Iowa. She graduated from Fairfield High School, where she was an award-winning baton twirler. Darlene then attended Parsons College in Fairfield for two years, where she was a majorette, and worked at a civil defense plant, also in Fairfield. On December 21, 1945, she married Dean Howard Luxford at the Parsons College Chapel; this was shortly after Dean’s return from active duty in World War II.

The couple moved to Shelby, Iowa, where Darlene helped start the marching band in the Shelby school. In 1952, she began working at Dean’s insurance office. She later worked in real estate, as well. Both Dean and Darlene retired on August 1, 1965. From 1970-72, they were part owners of the Shelby Dairy Queen, helping to build the building and business.

Darlene was a member of the First Presbyterian Church in Shelby, Iowa, where she was active in the church ladies group. She was a member of the “Corner Attic Artist Club” in Shelby, and was formerly an active Eastern Star member. Darlene loved to travel, and she and Dean would take their RV south to Corpus Christi, Texas. She enjoyed painting; she had the honor of designing the Shelby Centennial emblem.