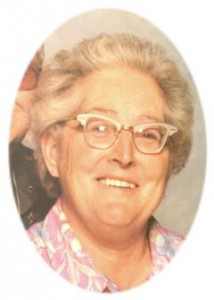 Lucille Princella Wirtz, the daughter of Frank M. and Lena S. (Stoltz) Smith, was born on October 29, 1920, in Panama, Iowa. She was baptized on December 12, 1920, at St. Mary of the Assumption Catholic Church in Panama. Lucille attended St. Mary’s School in Panama through the eighth grade; she then worked cleaning houses for others. On July 30, 1942, Lucille married Frank Alphonse Wirtz at St. Mary Magdalene Catholic Church in Omaha, Nebraska. During their married life, Lucille often followed Al as he drove truck for Western Engineering. After Al’s retirement in 1982, the couple moved to Harlan, Iowa. Following Al’s death, on July 25, 1995, Lucille became a resident of the Elm Crest Retirement Community in Harlan.

Lucille was a member of St. Michael’s Catholic Church in Harlan, Iowa. She loved to listen to country music and enjoyed cooking.

Lucille was preceded in death by her parents; her husband, Al Wirtz; and two brothers, Jack Smith and Ural Smith. She is survived by nieces, nephews, and other relatives and friends.

Mass of Christian Burial was held on Friday, January 18, 2008, at St. Michael’s Catholic Church in Harlan, Iowa, with Father Robert Hoefler celebrating. Kate Kohorst served as the pianist, and Maryalyce Dotzler was the vocalist. Casket bearers were Marlin Smith, Gaylen Smith, Roland Smith, Norman Smith, Randal Smith, and Daniel Smith. Burial was in St. Mary’s Cemetery in Panama, Iowa. Memorials may be directed to the wishes of the family. The Burmeister-Johannsen Funeral Home in Harlan was in charge of the arrangements.