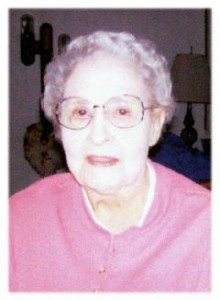 Nina Catherine Rihner, the daughter of Mads Christian and Anna Marie (Johansen) Nielsen, was born on March 18, 1915, near Hancock, Iowa. One of seven children, she attended Shelby schools through the tenth grade. On March 25, 1933, in Plattsmouth, Nebraska, Nina married Raymond Samuel Rihner. The couple made their home in Shelby, Iowa, where she worked alongside her husband in various businesses in Shelby and New Market, Iowa. Later, Nina worked for George Eble in the YBR Store in Shelby for over 19 years. She retired in 1988.

Nina was a member of the United Lutheran Church in Shelby, Iowa. She enjoyed taking part in Senior Center functions and visiting with people.

Nina was preceded in death by her parents; her husband, Raymond, on March 21, 1975; two sisters, Scena Lucke and Marie Pedersen; and four brothers, Soren, Johnny, Louie, and Charlie. She is survived by nieces, nephews, and many friends.

Funeral services were held on Thursday, January 17, 2008, at the United Lutheran Church in Shelby, Iowa, with Pastor Duane Anunson officiating. Nancy Armstrong served as the organist, and Lee McKnabb was the soloist. Casket bearers were Ron Kroll, Marc Morris, Gale Rihner, Roger Heilig, Richard Nielsen, and Richard Brockmann. Burial was in the Shelby Cemetery in Shelby, Iowa. The Burmeister-Johannsen Funeral Home in Shelby was in charge of the arrangements.