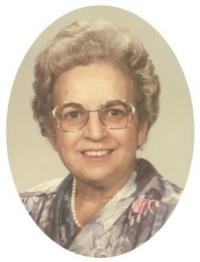 Betty Lou Robinson, the daughter of Karl and Louise (Giitterger) Hobbie, was born on August 2, 1924, on her parents’ farm in rural Nebraska City, Nebraska. She attended District #12 school in rural Nebraska City and graduated with the Nebraska City High School Class of 1942. After attending Normal Training at Peru State College in Peru, Nebraska, Betty taught country school in District #12 for several years. In 1944, Betty married Elmer Cogdill. She completed her four-year degree at Peru State College in 1962. In 1963, Betty began teaching first grade in Shelby, Iowa; she continued in this position for 27 years.

In July, 1976, Betty married William Dean Robinson in Harlan, Iowa. After her retirement, in 1990, she and Dean moved to Harlan. Dean died in August, 2000, and Betty became a resident of the Beatrice Good Samaritan Center in Beatrice, Nebraska, in 2002.

Betty was an active member of the Shelby United Methodist Church in Shelby, Iowa. She was also a member of both the Iowa and National Education Associations, and the Delta Kappa Gamma Sorority. Betty was also an enthusiastic Shelby resident, and enjoyed spending time crocheting, sewing, reading, and doing crafts. She loved to travel, and had visited Europe, Japan, and much of the United States; California was one of her favorite locations.

Betty L. Robinson died on Friday, January 4, 2008, at the Beatrice Good Samaritan Center in Beatrice, Nebraska, having reached the age of 83 years, 5 months, and 2 days.