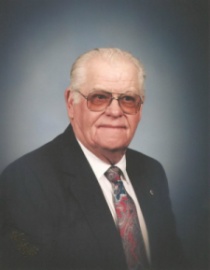 Allan Ray Thompson, the son of Danley and Gladys (Mellorup) Thompson, was born on April 30, 1925, near Irwin, Iowa. He graduated from Irwin High School in 1943, and served in the United States Army from April, 1945, though December, 1946. After his discharge from the service, Allan farmed southeast of Irwin with his father. He later ran the farm on his own. On June 25, 1950, at the Irwin United Methodist Church, Allan married Lyla Marie Wiese. The couple continued farming until 1972, when they retired and moved into town. Allan then sold Moorman’s Feed for seven years, and later worked part-time for several years at the Coop in Irwin.

Allan was a member of the Irwin United Methodist Church in Irwin, Iowa. As a child, he participated in 4-H. He also enjoyed playing softball when he was younger. Allan had served as an American Legion Commander for the Austin Earl Hiatt AL Post #614. He enjoyed spending time in the outdoors, camping and fishing at Storm Lake, Prairie Rose Lake, and Lake Anita.

Allan was preceded in death by his parents; his wife, Lyla Thompson; two brothers, Russell Thompson and Don Thompson; and one grandson, Joseph Goans. He is survived two daughters, Kathleen Goans of Kirkman, Iowa, and Lanette Sawyer of Idaho Springs, Colorado; two sons, Craig (Dianna) Thompson and Danny Thompson, all of Irwin, Iowa; one sister, Gloria (Paul) Bunge of Waterloo, Iowa; seven grandchildren; five great-grandchildren; and other relatives and friends.

Funeral services were held on Thursday, December 10, 2009, at the Irwin United Methodist Church in Irwin, Iowa, with Rev. Keith Pals officiating. Casket bearers were Roger Wiese, Jason Goans, John Ludwick, Lance Hanson, Tim Thompson, Justin Ahrenholtz, and Christopher Goans. Burial of ashes was in the Oak Hill Cemetery in Irwin, Iowa. The Burmeister-Johannsen Funeral Home in Harlan was in charge of the arrangements. Condolences may be left online at www.burmeisterjohannsen.com.