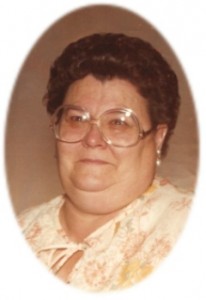 Juanita Jane McCool, the daughter of Charles Albert and Elma Dorothy (Main) Theulen, was born on December 25, 1930, in Bayard, Iowa. She attended first grade in Bayard, and the remainder of her elementary and high school years were spent at St. Peter and Paul School in Defiance, Iowa. Following graduation, she worked as a waitress in Shelby, Iowa. On July 13, 1950, she married Larry Steven McCool in Kansas City, Kansas. The couple farmed east of Tennant, Iowa, for many years. Juanita worked parttime at the Tennant grocery store and Post Office, and from 1972-2000 she was employed by Cox Grain and Feed in Tennant. She also worked for a brief time at CDS in Harlan, Iowa. In April, 2007, Juanita became a resident of Little Flower Haven in Earling, Iowa.

Juanita was a former member of the Tennant United Methodist Church. She enjoyed growing strawberries and rhubarb, and tending her cherry trees.

Funeral services were held on Friday, October 9, 2009, at the Burmeister-Johannsen Funeral Home in Harlan, Iowa, with Jim Boardman officiating. Casket bearers were Jeff Theulen, Shawn McCool, David McCool, Eugene McCool, Wayne Boardman, and Steve Boardman. Burial was in the Shelby Cemetery in Shelby, Iowa. The Burmeister-Johannsen Funeral Home in Harlan was in charge of the arrangements. Condolences may be left online at www.burmeisterjohannsen.com.