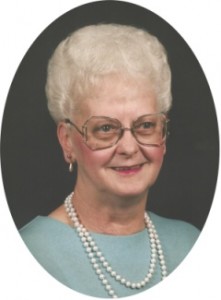 LuAnn Cordell Hess Sorensen, the daughter of Mac and Thelma (Miller) Madsen, was born on December 1, 1936, in Audubon, Iowa. She attended elementary school in Kimballton, Iowa, and graduated from Elk Horn (Iowa) High School. On January 22, 1955, LuAnn married Duane George Hess in Kimballton. The couple farmed near Jacksonville, Iowa, for a number of years. They later moved to Harlan, Iowa, and LuAnn worked as a parttime waitress at area restaurants. Duane died on May 16, 1996, in Harlan.

On January 10, 2001, in Las Vegas, Nevada, LuAnn married Veral Dean Sorensen. They made their home in Exira, Iowa, and enjoyed wintering in Texas.

LuAnn was a member of the Bethlehem Lutheran Church in Jacksonville. She loved to cook and bake, and had collected many cookbooks over the years.

LuAnn was preceded in death by her parents and her first husband, Duane G. Hess. She is survived by her second husband, Veral D. Sorensen of Exira, Iowa; three sons, Rick Hess and his special friend, Bev Krukow, both of Spencer, Iowa, and Rod (Diane) Hess and Randy Hess, all of Harlan, Iowa; two daughters, Cindy (Larry) Petersen of Jacksonville, Iowa, and Colette Hess of Harlan, Iowa, and her special friend, Kevin Bruck of Earling, Iowa; four step-children; 15 grandchildren; 11 step-grandchildren; seven great-grandchildren; one step-great-grandchild; and other relatives and friends.

Funeral services were held on Thursday, October 8, 2009, at the Bethlehem Lutheran Church in Jacksonville, Iowa, with Pastor Ron Rasmussen officiating. Yvonne Jensen served as the organist. Casket bearers were Jeremy Hess, Ryan Hess, Austin Hess, Adam Petersen, Jeff Petersen, Bryan Schuemann, and Cody Sorensen. Burial was in the Jacksonville Cemetery in Jacksonville, Iowa. The Burmeister-Johannsen Funeral Home in Harlan was in charge of the arrangements. Condolences may be left online at www.burmeisterjohannsen.com.