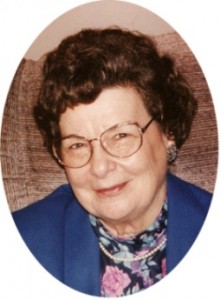 Mada Colene Wahling, the daughter of J. Luther and May (Polsley) Barnard, was born on January 22, 1917, in rural Omega, Oklahoma. She attended schools in Omega, and then attended Central State College in Edmond, Oklahoma, for one year. On February 16, 1936, Mada married Edgar John Wahling at her parents’ home in Loyal, Oklahoma. The couple farmed the Wahling home place east of Shelby, Iowa, and made this their home for 39 years. In 1975, they moved to a farm west of Shelby to retire and travel. Edgar died on August 3, 1989, in Council Bluffs, Iowa. Mada became a resident of the Avoca (Iowa) Assisted Living, Nursing and Rehab Center on November 1, 2003.

Mada was a member of the United Lutheran Church in Shelby, where she taught Sunday School classes and was active with the church women. She was a member of the Shelby Community Club, served as Past Matron of the Order of Eastern Star, and was on many school committees. Mada treasured her life as a homemaker and farm wife. She enjoyed oil painting and writing, and loved holidays, especially Christmas.

Mada was preceded in death by her parents; her husband, Edgar J. Wahling, one sister, Arlene Banther; two brothers, George Barnard and Leon Barnard; one daughter-in-law, Lorna Wahling; and one grandson, Brandon Wahling. She is survived by four sons, Jon Wahling of Columbus, Ohio, and Eugene (Lynda) Wahling, Dennis (Norma) Wahling, and David Wahling, all of Shelby, Iowa; seven grandchildren; 12 great-grandchildren; one great-great-grandchild; nieces and nephews; and other relatives and friends.

Funeral services were held on Saturday, September 19, 2009, at the United Lutheran Church in Shelby, Iowa, with Pastor Duane Anunson officiating. Casket bearers were Jan Flemming, Brian Flemming, Matt Sternberg, Richard Goshorn, Joel Wahling, and Richard Armstrong. Burial was in the Shelby Cemetery in Shelby, Iowa. The Burmeister-Johannsen Funeral Home in Shelby was in charge of the arrangements. Condolences may be left online at www.burmeisterjohannsen.com.