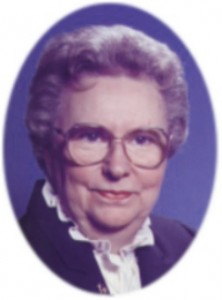 Lorene Elizabeth Thogersen, the daughter of George and Elizabeth (Cambell) Nagel, was born on February 25, 1924, in Dexter, Missouri. She attended Dexter schools through the eighth grade. As a child and young adult, Lorene picked cotton so she could have money for school, have her hair permed, and purchase one new dress. She left home at an early age and went to work. On November 14, 1942, Lorene married Howard Kenneth Thogersen in Bernie, Missouri. The couple traveled, following Kennie’s work building pipelines. The couple retired in Lansing, Illinois, in the early 1980s. In June, 2006, they moved to Harlan, Iowa, and became residents of the Elm Crest Retirement Community. Kennie died on October 12, 2007, in Harlan.

Lorene enjoyed traveling with Kennie. She liked to crochet, collect antique dishes, bake, and make jello salads. Lorene was a quiet person who was known to often wear pearls.

Lorene was preceded in death by her parents; her husband, Kennie; two sisters, Ruby Millstead and Florence Chapman; three brothers, Corbet Nagel, Norman Nagel, and Ernest Nagel. She is survived by many nieces and nephews, and other relatives and friends.

Funeral services were held on Tuesday, September 8, 2009, at the Burmeister-Johannsen Funeral Home, Harlan, Iowa, with Rev. Al Hazelton officiating. Casket bearers were Deb Svoboda, Jon Burmeister, Terrie Ten Eyck, Seth Johannsen, Dennis Svoboda, and DeAnn Ten Eyck. Burial was in the Harlan Cemetery in Harlan, Iowa. The Burmeister-Johannsen Funeral Home in Harlan was in charge of the arrangements. Condolences may be left online at www.burmeisterjohannsen.com.