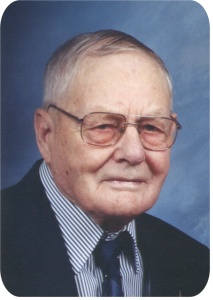 Elmer Andersen passed away Thursday, September 3, 2009, at the age of 102 years, 3 months, and 15 days, at the Avoca Nursing and Rehab Center in Avoca, Iowa. Elmer was born on May 19, 1907, in Audubon County, Iowa, to Kristen Petersen Andersen and Johanna Marie (Hansen) Andersen. He was baptized and confirmed at the Bethany Lutheran Church located east and north of Kimballton, Iowa.

Elmer worked for several people in his teen years, including Chris and Helena Christensen near Elk Horn, Iowa, where he met Mildred Jensen and later married April 2, 1935. Their first home was in Elk Horn, they then started farming east of Elk Horn where a son and two daughters were born. They moved to a farm near Fiscus, Iowa, in 1941, then bought their own farm in Shelby County in 1947, seven miles south of Irwin, Iowa, where another daughter was born. In 1990, Elmer and Mildred built a home in Elk Horn, where they lived until 2005, when they retired to the Harlan Retirement Home. He lived briefly in the Peace Haven Retirement Home in Walnut, Iowa, before going to the Avoca Nursing and Rehab Center.

Elmer and Mildred enjoyed their home, family, neighbors and many friends, celebrating 70 years of marriage. Elmer enjoyed their trips to Denmark to visit cousins, family and friends recalling a childhood visit by ship in 1913. He raised and showed ponies and participated in parades in the surrounding area, enjoying many friends in the horse business.

Elmer is preceded in death by his parents; his wife, Mildred, in 2005; and his two brothers, Hans and wife Sylvia, and Chris and wife Mabel. He is also preceded in death by two sisters-in-law, Evelyn and husband Ralph Hansen, and Glenda and husband Clifford Andersen; one son-in-law, Harold Smith; two grandsons, Scott Andersen and Robert Thompson; and two nephews Robert Andersen and Donald Andersen.