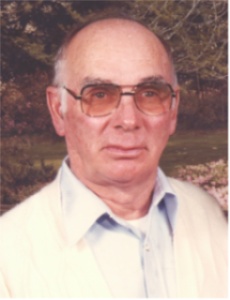 Jack Wendell Carmichael, son of Neil and Mary Lenore (Tobias) Carmichael, was born on July 7, 1922 in rural Harlan, Iowa. He attended country school in Monroe Township. After graduating from Harlan High School, Jack worked as a welder in the shipyards in CA. Jack joined the Navy and came home to tell his parents good bye before leaving for active duty. It was at this time in the kitchen of his parents home where he met Helen Glen Algren, the Cuppy’s Grove school teacher who was boarding with his family. Helen later became his wife. He then left for active service for three years and 21 days, and was stationed in the North Atlantic, Western Pacific and South Pacific Oceans during World War II.

On October 10, 1944 in Miami, Florida, Jack and Helen were married. Following Jack’s discharge, the couple returned to his childhood home southeast of Harlan, where they farmed for a number of years. Later, he worked construction for G.A. Findley in Harlan. In the early 1970s, Jack began working for the Soil Conservation Service as a State Technician.

Jack was a member of Bethlehem Lutheran Church in Jacksonville, Iowa, and the Helmer Reyelt A.L. Post #150, where he had served as Commander for four years. He enjoyed spending time with his family, and his hobbies included china painting, gardening, and baking. Community service was also important to Jack as he often would take fresh produce to the nursing home, served as a Big Brother, and was there to help those in need. Jack and Helen often took baked goods to the organization of Concerned.

Jack W. Carmichael died on Sunday, August 9, 2009 at the Skiff Medical Center in Newton, Iowa, having reached the age of 87 years, 1 month, and 2 days.

Jack was preceded in death by his parents and his wife, Helen G. Carmichael, on March 27, 2009. He is survived by two daughters, Claudia (Rusty) James of Des Moines, Iowa, and Kathleen (John) Crist of Raymore, Missouri; one son, Jeff (Connie) Carmichael of Newton, Iowa; one sister, Kathryn Thoreen of Lexington, Nebraska; six grandchildren; ten great grandchildren; and other relatives and friends.

Funeral services were held on Thursday, August 13, 2009 at the Bethlehem Lutheran Church in Jacksonville, Iowa, with Pastor Ron Rasmussen officiating. Peggy Doonan served as organist and Ron and Carol Moon were the vocalists. Casket bearers were Ken Shetler, Sylvan Klein, Dale Larsen, Dave Murphy, Dick McLaughlin, and Virgil Koppold. Burial was in the Jacksonville Cemetery in Jacksonville, Iowa. The Burmeister-Johannsen Funeral Home in Harlan was in charge of the arrangements. Condolences may be left on line at www.burmeisterjohannsen.com.