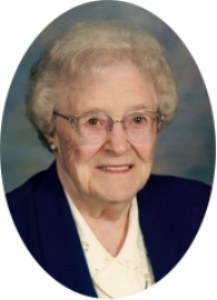 Cecelia Marie Gross, the daughter of John and Mary (Fromm) Klein, was born on July 12, 1909, in rural Defiance, Iowa. She attended public country school north of Harlan, Iowa, and then attended St. Boniface Catholic School in Wesphalia, Iowa. During this time, Cecelia helped care for her three younger brothers and worked on the farm after school. She met Michael Jacob Gross at a dance at the Defiance Hall, and the couple married on January 20, 1931, at St. Michael’s Catholic Church in Harlan. They farmed southeast of Defiance until 1951, when they moved to their newly constructed farmhouse and buildings located three miles north of Harlan. In 1971, Cecelia and Mike retired to Harlan. Mike died on July 18, 1987, in Harlan. Cecelia had recently become a resident of the Little Flower Haven Nursing Home in Earling, Iowa.

Cecelia was a member of St. Michael’s Catholic Church in Harlan, Iowa. She greatly enjoyed spending time with her family, as well as quilting, knitting, crocheting, and playing cards.