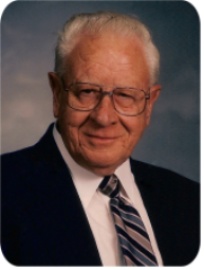 William “Bill” Cleveland League, Jr., the son of William Cleveland and Maude Pearl (Reddington) League, Sr., was born on January 8, 1921, in Walnut, Iowa. After graduating from Walnut High School in 1938, Bill worked in the family dray business. In 1943, he joined the United States Army and was shipped to England in 1944. On August 21, 1945, Bill married Marian Pattie Taylor at St. Anne’s Church in Bowden Hill, England. After Bill’s discharge from the service in April 1946, he and Marian moved to Walnut, where they lived until entering the Avoca Nursing and Rehab Center in Avoca, Iowa, in May 2007. Marian died on March 17, 2009, in Avoca.

Bill was preceded in death by his parents; his wife, Marian League; one sister and brother-in-law, Clara May and Gordon Tooley; and one brother, Jerry League. He is survived by one son, Ted League and his wife, Kathy, of New Braunfels, Texas; one sister, Adele Pedersen of Walnut, Iowa; four grandchildren; five great-grandchildren; nieces and nephews; and other relatives and friends.

Funeral services were held on Wednesday, August 12, 2009, at the First Presbyterian Church in Walnut, Iowa, with Rev. David Krueger officiating. Diane Book served as the organist and Elizabeth Book was the soloist. Casket bearers were Kevin Marsh, Sean Gill, Justen Tooley, Darren Tooley, Dean Thompsen, and Jordan Hoffman. Burial was in the Layton Township Cemetery in Walnut, Iowa, with military rites performed by the A.L. Post #422 of Walnut. The Burmeister-Johannsen Funeral Home in Harlan was in charge of the arrangements. Condolences may be left online at www.burmeisterjohannsen.com.