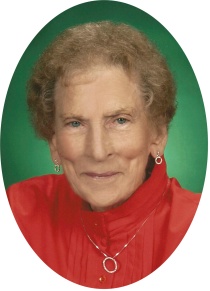 Glenna Aileen Schaffer was born May 17, 1924, in Carbon, Iowa, the daughter of Carl Edward Schaffer and Esther Maria O’Riley Schaffer. Glenna attended school in Carbon and Villisca, Iowa. She was united in marriage to Cecil Charles Fudge in Maryville, Missouri, on July 7, 1942. To this union four children were born: Donna (Vernon) Else of Harlan, Iowa, the late Larry (Kay) Fudge of Corning, Iowa, Linda (Randy) Mahlberg of Sloan, Iowa, and Nancy Walters of Manning, Iowa. They lived in the Brooks and Corning area where Glenna worked as a waitress until 1966. They moved to Harlan, where she worked at the We Wash It Laundry, as well as the Baptist Memorial Home as a nurses’ aid. After retirement, she babysat several children who were very special to her. On September 14, 1974, Glenna married Harold Clair Holdren at the First United Methodist Church in Harlan, of which she was a member.

Glenna A. Holdren passed away on Thursday, July 23, 2009, at Myrtue Medical Center in Harlan following a lengthy illness. She had reached the age of 85 years, 2 months, and 6 days.

Glenna is preceded in death by her husbands, Cecil Fudge and Harold Holdren; her parents, Carl and Esther Schaffer; her stepfather, Homer Houck; four brothers, Edward, Clifford, Cecil, and Clark; one sister, Valentine (Clyde) McHenry; one son Larry Fudge; and one grandson, Tom Else.

Funeral services were held on Saturday, July 25, 2009, at the Burmeister-Johannsen Funeral Home in Harlan, Iowa, with Pastor Ron Rasmussen officiating. Pastor Rasmussen also served as the soloist. Casket bearers were Brian Ernst, David Archibald, Chad Mahlberg, Bob Mahlberg, Phil Kinser, and Tony Hardisty. Burial was in the Walnut Grove Cemetery in Corning, Iowa. The Burmeister-Johannsen Funeral Home in Harlan was in charge of the arrangements. Condolences may be left online at www.burmeisterjohannsen.com.