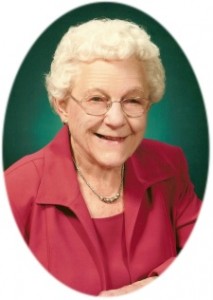 Evelyn Ruth Andersen, the daughter of Frank William and Irene Augusta (Ewoldt) Meier, was born on July 1, 1918, in Harlan, Iowa. She was baptized at Immanuel Lutheran Church in Harlan on November 14, 1920, and confirmed on April 10, 1938. Evelyn attended country schools and graduated from Harlan High School in 1935. On April 15, 1939, she married Arnold George Andersen in Harlan. The couple farmed in the Harlan area until 1973, when they moved into town.

Evelyn was a lifelong member of Immanuel Lutheran Church in Harlan, and had actively attended until just recently. Through the years, she enjoyed working part-time at Coast to Coast and True Value Hardware stores in Harlan. She was a member of the Zenobia Rebekah Lodge #286, as well as the Myrtue Medical Center Auxiliary. Evelyn loved her family, especially her grandchildren and great-grandchildren, and she took pride in being a gracious hostess, keeping a clean house and fixing good hot meals for family and friends. She also liked to spend time making quilts.

Funeral services were held on Friday, July 3, 2009, at Immanuel Lutheran Church in Harlan, Iowa, with Pastor Steve Chellew officiating. Jennifer Perkins was the organist, and Diane Kastens served as the soloist. Casket bearers were Brian Andersen, Chad Olsen, Allen Ickes, Arthur Andersen, Robert Andersen, and Rick Andersen. Burial was in the Harlan Cemetery in Harlan, Iowa. The Burmeister-Johannsen Funeral Home in Harlan was in charge of the arrangements. Condolences may be left online at www.burmeisterjohannsen.com.