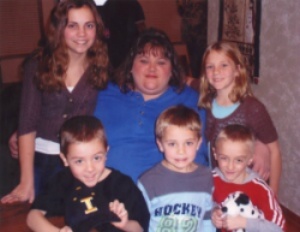 Brenda Ann Zimmerman, the daughter of Ronald Lee and Marilyn Kay (Goetzinger) Zimmerman, was born on May 4, 1970, in Harlan, Iowa. She graduated from Harlan High School in 1988, and began working as a caregiver at REM Leadway in Shelby, Iowa; she worked there for four years. Brenda then became a shipping/loading manager for Variety Distributors in Harlan, and held this position for a number of years. She later worked caring for the handicapped at the Glenwood (Iowa) Resource Center. In recent years, she was unable to work due to disability, and had moved to Council Bluffs, Iowa.

During her high school years, Brenda enjoyed track and field events, and held records in the shot put and discus. She also liked participating in CYO basketball and swimming. She was a dedicated person who loved babysitting children and caring for others. Brenda’s nieces and nephews were especially dear to her.