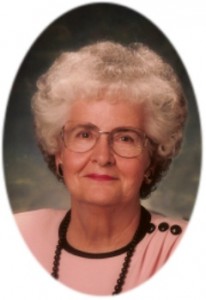 Myrtle Irene Juelsgaard, the daughter of Lauritz Peter and Dagmar Andrea (Mortensen) Lange, was born on November 3, 1927, on the family farm near Kimballton, Iowa. She was baptized and confirmed at Bethany Lutheran Church in rural Kimballton. She attended Sharon Township country school through the eighth grade before working as a hired girl for area families. On January 6, 1946, Myrtle married Dale Juelsgaard at the Lutheran Parsonage in Elk Horn, Iowa. The couple farmed in Audubon and Shelby County until 1998, when they moved into Elk Horn. In recent weeks, they had become residents of the Salem Lutheran Home in Elk Horn.

Myrtle was a member of the Elk Horn Lutheran Church in Elk Horn. She was an active community member throughout the years. Myrtle had a great sense of humor and loved to give treats to her grandchildren. She was a good cook and was always ready to feed a guest; she also liked to bake.

Myrtle I. Juelsgaard died on Tuesday, June 16, 2009, at Myrtue Memorial Hospital in Harlan, Iowa, having reached the age of 81 years, 7 months, and 8 days.

Funeral services were held on Saturday, June 20, 2009, at the Elk Horn Lutheran Church in Elk Horn, Iowa, with Pastor Keith Menter officiating. Nancy Watson served as the organist and Jeni DePue was the soloist. Casket bearers were Patty Bauer, Jeni DePue, Dave Juelsgaard, Marty Juelsgaard, Colton Juelsgaard, Brenna Juelsgaard, and Cindy Hanson. Burial was in the Elk Horn Lutheran Cemetery in Elk Horn, Iowa. The Burmeister-Johannsen Funeral Home in Harlan was in charge of the arrangements. Condolences may be left online at www.burmeisterjohannsen.com.