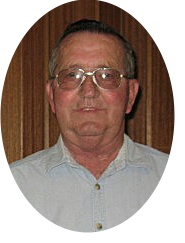 Kenneth Elmer “Nick” Rosenow, the son of Perley A. and Loretta L. (Albers) Rosenow, was born on February 3, 1938, in Earling, Iowa. He graduated from Tennant (Iowa) High School in 1955. Following high school, Nick was employed by Cox Grain and Cooper Farms. On August 26, 1960, he married Mildred LaVon Kiesel at the United Lutheran Church in Shelby, Iowa. Nick then worked for his father-in-law at Elmer Kiesel Implement, as well as the Shelby Elevator. In 1972, he began working as a custodian with the AHST school system; he later was also a bus driver for the school. Nick retired in 2006, and had recently become a resident of the Avoca Nursing and Rehab Center in Avoca, Iowa.

Nick was a member of the United Lutheran Church in Shelby, Iowa. He was a board member of the Carstens Farm organization, where he enjoyed helping out. He was a volunteer fireman with the Shelby Fire Department from May 27, 1971, until February 26, 1998, and had the honor of serving as fire chief from 1977-1992. Nick enjoyed gardening and helping with canning. He liked going on antique tractor rides and collecting toy tractors; various Minneapolis-Moline models were particular favorites. Nick spent time watching stock car races in Harlan, Denison, Iowa, and Kansas City, Kansas, as well as on television. He was especially proud to have helped his “Good Old Boys” add a railroad caboose to the Shelby Park.