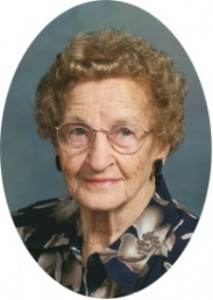 Cecil Amanda Sievertsen, the daughter of William F. and Amelia (Kai) Walter, was born on January 5, 1916, near Aspinwall, Iowa. She attended school in Westside, Iowa. After she finished the eighth grade, Cecil worked at the Manilla (Iowa) Hotel. On April 27, 1937, she married Gordon Jacob William Sievertsen in Manilla. The couple worked on farms around the Manilla, Defiance, and Harlan, Iowa, area. In 1970, they moved to Harlan. Gordon died on March 24, 1973, in Harlan. Following Gordon’s death, Cecil worked at various area restaurants and did babysitting.

Cecil was a member of the Immanuel Lutheran Church in Harlan, Iowa. She enjoyed doing handwork and was a good cook; her baked goods were especially delicious. Cecil liked to spend time visiting with friends and neighbors, as well as attending Senior Center events.

Cecil A. Sievertsen died on Wednesday, May 6, 2009, at the Elm Crest Retirement Community in Harlan, Iowa, having reached the age of 93 years, 4 months, and 1 day.

Funeral services were held on Saturday, May 9, 2009, at Immanuel Lutheran Church in Harlan, Iowa, with Pastor Steve Chellew officiating. Jennifer Perkins served as the organist, and Diane Kastens was the soloist. Casket bearers were Brian Sievertsen, David Walter, John Hoffman, Wayne Elwell, Gary Walters, and Roger Weinbrandt. Burial was in the Iowa Township Cemetery in Aspinwall, Iowa. The Burmeister-Johannsen Funeral Home in Harlan was in charge of the arrangements. Condolences may be left online at www.burmeisterjohannsen.com.

After all, universities, recreation, the cost of living, peaceful community are really great. Of course, heartiness is actually momentous. According to statistics, we often find Americans buy remedies online. There are varied beneficial medicaments obtainable without recipe. For instance you can purchase medications that fights bacteria. This type of drugs will not treat a viral infection for example a common flu. Unconditionally, you have to check with your physician to see whether one of these remedies is a appropriate choice for you. Cialis is a medicine used to treat various viruses. What do you know about cialis com free offer? What is the most significant information you must consider about www.cialis.com free sample? Medicaments, the fact that, is going to improve your breath. What are the symptoms of erectile dysfunction? There are more than 200 prescription medicines can cause erectile disfunction, including pop blood pressure drugs, pain medications, and certain antidepressants. Ordinarily the treatment options may include sexual dysfunction medications or counseling. Generally medicaments like Cialis should be under repeated attention, especially regarding its interaction with other medications. Follow directions for use on your prescription label.