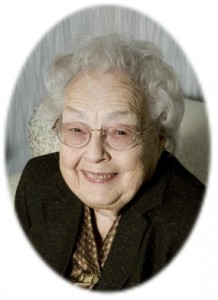 Blanche Anna Burmeister, daughter of Harry L. and Mildred (Findlay) Peterson, was born on February 25, 1921, on a farm near Cuppy’s Grove in the Monroe Township of Shelby County, Iowa. She attended school in Cuppy’s Grove for eight years, followed by Harlan (Iowa) High School for three years. A family move took her to Oakland, California, where she graduated in 1938. She worked for Dr. Maassen five years following graduation.

On December 28, 1943, Blanche married Alvin H. Burmeister, a farmer living near Corley, Iowa, in the Fairview Township. They lived and worked on the family farm where Alvin lived all of his life. Blanche was a dedicated farm wife and homemaker. After Alvin retired from farming, Blanche and Alvin enjoyed many winters in Kissimmee, Florida, with many of their friends.

Blanche’s life was blessed with smiles and happiness brought by her children, grandchildren and great-grandchildren. She loved to play cards, Po-Ke-No and teach her grandkids how to play 21 with pennies! She always had candy (usually Brach’s, definitely Butterscotch and Cinnamon) ready for the taking and geraniums and snapdragons in her garden. She loved mowing the lawn on her lawn tractor, baking wonderful rolls and many other things, and doing search-a-word puzzles. Blanche had a small organ in their home where she might be found playing a hymn or two – “How Great Thou Art” was her favorite. She loved lilacs and lily of the valley, always dreamed of having a Lincoln Town Car, and always had to sneeze three times if she was going to sneeze at all. She used to wear dresses all the time, but eventually, that gave way to slacks, which she actually enjoyed wearing more. In the summer, she might be found riding her trike to the mailbox, canning, or making fresh cucumber and onion salad. She hosted “Club” for the ladies and that was the only time the grandchildren weren’t welcome to walk right in her door. She often hosted sleepovers for the grandkids as well, sure to bring late-night TV watching, fun snacks and lots of card playing. She also enjoyed crocheting and cross stitching. Blanche had quite a sense of humor, too – quick to the end with teasing comments, a wink and a grin.

Blanche Anna Burmeister died peacefully on Monday, April 20, 2009, at her daughter Diane’s home in Urbandale, Iowa, at the age of 88 years, 1 month and 26 days.