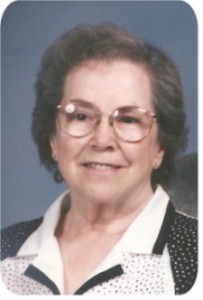 Helen Glen Carmichael, daughter of Frank Albert and Sarah Phoebe (Campbell) Algren, was born on January 4, 1924 in Manning, Iowa. After graduating from Manilla (Iowa) High School in 1941, she attended Iowa State Teachers College (UNI) in Cedar Falls, Iowa for one year. Helen taught country school for a year at Cuppy’s Grove School and boarded with the Carmichael family. It was during this time she met Jack Wendell Carmichael when he came home from the ship yards after enlisting in the US Navy during WWII. She had fond memories of meeting him in the Carmichael kitchen the first time. Helen taught first and second grades in Tennant, Iowa the next year.

October 10, 1944 in Miami, Florida Jack and Helen were married. During the war Helen lived with her in-laws and Jack joined her after his discharge. The couple raised their family in that same home.

In 1960 Helen began working as a nurse’s aid at the Myrtue Memorial Hospital. She received her LPN degree in 1967 and continued working in the health care field until her retirement in 1987.

Helen was a member of Bethlehem Lutheran Church in Jacksonville, Iowa, and a former member of the Altamont Baptist Church in rural Shelby County, Iowa. She was known to be an awesome cook, and she enjoyed sewing. Helen and Jack also liked to spend time together doing china painting.

Helen was preceded in death by her parents, and three sisters, Ann Nash, Jean Chuhak, and Mary Crotty. She is survived by her husband of 64 years, Jack Carmichael of Newton, Iowa; two daughters, Claudia (Rusty) James of Des Moines, Iowa, and Kathleen (John) Crist of Raymore, Missouri; one son, Jeff (Connie) Carmichael of Newton, Iowa; one sister, Lois Stitch of St. Louis, Missouri; six grandchildren; ten great grandchildren; and other relatives and friends.

Funeral services were held on Tuesday, March 31, 2009 at the Bethlehem Lutheran Church in Jacksonville, Iowa, with Pastor Ron Rasmussen officiating. Peggy Doonan served as organist and Ron and Carol Moon were the vocalists. Casket bearers were Brad Crist, Mike Crist, Laura Crist, Scott James, Cindi Johnson, Danielle Keninger, Korey Keninger, and Christina Carmichael. Burial was in the Jacksonville cemetery in Jacksonville, Iowa. The Burmeister-Johannsen funeral home in Harlan was in charge of the arrangements. Condolences may be left on line at www.burmeisterjohannsen.com.