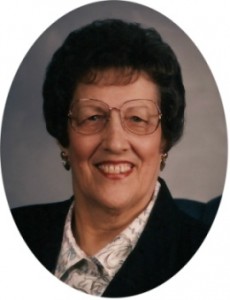 Marian Pattie League, the daughter of Arthur William and Annie Eliza (Ball) Taylor, was born on September 27, 1926 in Bowden Hill, Wiltshire, England. She was baptized and confirmed at St. Anne’s Church in Bowden Hill. Marian attended school at Lacock in Wiltshire and served in the Women’s Land Army during World War II. On August 21, 1945 at St. Anne’s Church, she married William Cleveland League, Jr. of Walnut, Iowa, who was serving with the armed services in England. She joined her husband in Walnut in 1946. Marian was a successful Avon saleswoman and was active with the company for 50 years. She became a resident of the Avoca Nursing and Rehab Center in Avoca, Iowa, in May 2007.

Marian became a member of the First Presbyterian Church in Walnut, Iowa, on November 23, 1947; she began singing in the choir in 1950. She had served as a Sunday School teacher and Superintendent, helped with Bible school, and had been a church trustee and elder for many years. Marian was also involved with other community organizations including the Amvets Auxiliary. She enjoyed doing knitting and other handwork during her free time.

Marian was preceded in death by her parents, three sisters, and one brother. She is survived her husband of 63 years, Bill League of Avoca, Iowa; one son, Ted (Kathy) League of New Braunfels, Texas; four grandchildren; five great-grandchildren; nieces and nephews; and other relatives and friends.

Funeral services were held on Friday, March 20, 2009, at the First Presbyterian Church in Walnut, Iowa, with Rev. David Krueger officiating. Diane Book served as the organist and Elizabeth Book was the soloist. Casket bearers were Justen Tooley, Darren Tooley, Kevin Marsh, Jerry Hoffman, Sean Gill, and Paul Riley. Burial was in the Layton Township Cemetery in Walnut, Iowa. The Burmeister-Johannsen Funeral Home in Harlan was in charge of the arrangements. Condolences may be left online at www.burmeisterjohannsen.com.