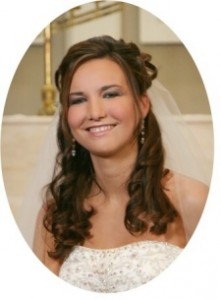 Nicole Christian Misselhorn, the daughter of Hans Jay and Susan (Hawley) Nielsen, was born on September 14, 1983, in Manning, Iowa. She was baptized at Immanuel Lutheran Church in Harlan, Iowa, on October 30, 1983. Nicole grew up on the family farm south of Defiance, Iowa, where she attended Irwin-Kirkman-Manilla schools and was active in 4-H, LYO basketball, and cheerleading. After graduating from IKM High School in 2002, Nicole attended Iowa State University for two years. She later attended Des Moines Area Community College (DMACC) in Carroll, Iowa, where she received her RN degree on May 7, 2007. She was proud to have passed her nursing boards on August 19, 2008.

On June 16, 2007, Nicole married Jeremy Keith Misselhorn at Immanuel Lutheran Church in Harlan. They made their home in Manilla, and she was employed at the Manilla Manor.

Nicole was a member of Immanuel Lutheran Church in Harlan, where she was confirmed on May 3, 1998. She was an active person who loved swimming, spending time around horses, and watching stormy weather. Nicole enjoyed country music and fashionable clothes, and appreciated nice cars and Harley Davidson motorcycles. Her dog, Taco, was very special to her, and she cherished her family and many friends, to whom she was a true blessing.

Nicole C. Misselhorn died on Thursday, January 22, 2009, at Nebraska Methodist Hospital in Omaha, Nebraska, at the age of 25 years, 4 months, and 8 days.

Memorial services were held on Wednesday, January 28, 2009, at Immanuel Lutheran Church in Harlan, Iowa, with Pastor Steve Chellew officiating. Jennifer Perkins served as the organist. Burial of ashes will take place at a later date at the Nishnabotna Township Cemetery in Manilla, Iowa. The Burmeister-Johannsen Funeral Home in Harlan was in charge of the arrangements. Condolences may be left online at www.burmeisterjohannsen.com.