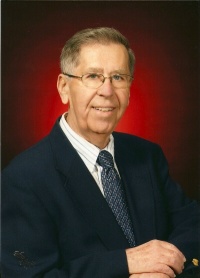 Henry George Flessner, the son of George and Anne (Buenting) Flessner, was born on November 1, 1935, in Rockford, Iowa. He grew up in the Floyd County, Iowa, area, and graduated from Rockford High School in 1954. He attended Wartburg College in Waverly, Iowa, and graduated from Wartburg Seminary in Dubuque, Iowa, in 1962. Following his ordination, Pastor Henry served congregations in Lake Andes, South Dakota; Cambridge, Iowa; Nevada and El Dorado Springs, Missouri; Ord, Nebraska; and Sioux Center, Iowa. From 1970-1986, he was also a Chaplain at the Nevada State Hospital in Nevada, Missouri. While he was in Nevada, Pastor Henry was an active EMT and started a successful 24 hour/ 7 day “Call for Help” Center. Most recently, he served Immanuel Lutheran Church in Harlan, Iowa, as Visitation Pastor, and Bethlehem Lutheran Church, Jacksonville, Iowa, as Interim Pastor. He retired in 2007, and moved to Raymore, Missouri, in June 2008.

Pastor Henry was a member of Immanuel Lutheran Church in Harlan. He had a special love for people, and enjoyed gardening and woodworking. He was active in various organizations including Lion’s Club, Rotary, Boy Scouts, and Kiwanis.

Funeral services were held on Friday, January 9, 2009, at Immanuel Lutheran Church in Harlan, Iowa, with Pastor Steve Chellew officiating. Jennifer Perkins served as the organist. Casket bearers were Donna Ewert, Kelly Peters, Dave Pedersen, Sheldon Howerter, Ron Randall, and Merle Lawyer. Burial was in the Harlan Cemetery in Harlan, Iowa. The Burmeister-Johannsen Funeral Home in Harlan was in charge of the arrangements. Condolences may be left online at www.burmeisterjohannsen.com.