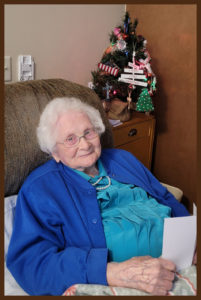 Helen Marcine Dea, daughter of Henry and Prudence Rebekah (Cushing) Osbahr, was born on July 9, 1923, in rural Shelby, Iowa. She attended country school until the age of seven. After the death of her parents, Helen was raised by Emil and Hanna Meves of Avoca, Iowa, and attended Avoca Public Schools. She was a member of the Avoca High School Class of 1940.

On March 19, 1945, Helen married John Francis Dea in Papillion, Nebraska; their marriage was blessed by the Catholic Church in June 1945. Following John’s discharge from the service on August 2, 1946, the couple began farming south of Minden, Iowa. In 1950, they moved one mile south and continued to farm. In 1984, John and Helen retired to Shelby. Having raised most of her 12 children, Helen then worked for several years at the Copper Kettle Restaurant north of Minden.

Helen was a member of St. Patrick’s Catholic Church in Neola, Iowa, where she liked to spend time quilting with other women of the church. She was a member of the Friendship Seniors Club in Shelby, and was known to be a good cook and baker; her fresh bread and cinnamon rolls were enjoyed by many. Helen was skilled at keeping a garden and canning produce to help feed her large family.