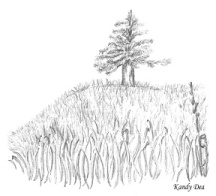 John Francis Dea of Shelby, Iowa, died on Friday, March 12, 2010, at the Avoca Nursing Home, Avoca, Iowa, at the age of 86 years, 2 months, 3 days. John was born to William Barron Dea and Cecilia Helena (Dargin) Dea on the family farm south of Shelby, Iowa, on January 9, 1924. He received Baptism, Holy Communion and Confirmation at St. Mary’s Church, Avoca, Iowa. He received Last Rites on March 11, 2010. He attended school at Shelby Consolidated School and graduated in the class of 1941.

John met his wife Helen Marcine Osbahr in August 1944 and they were married March 19, 1945, in Papillion, Nebraska. Their marriage was blessed by the Catholic Church in June 1945, and they would have celebrated their 65th anniversary in 2010. To this union 14 children were born.

John farmed with his father after high school until enlisting in the United States Marine Corps in March 1945, where he was stationed at both Parris Island, South Carolina, and Camp LeJuene, North Carolina. John received training as a diesel mechanic in preparation for overseas service in the Pacific; however the war ended before he shipped out. While in the Marines John spent time boxing and was a member of the church choir. He discharged from the military in August 1946.

Following his military discharge, he worked for Blue Star in Atlantic, Iowa, where he lived with his wife and baby daughter, Marcine. In April, 1947, they moved to a farm south of Minden, Iowa, where he farmed 120 acres owned by his father until moving to another farm a mile farther south in 1950. By then the family had grown to four children with the addition of three sons. He continued to farm at this location until 1978. For several years he also worked the graveyard shift for Stauffer’s Chemical Company in Omaha, Nebraska, to make ends meet.

After retiring from farming in 1978, John went to work for Federal Crop Insurance Company as an adjuster and insurance salesman. In 1981 he spent a year working for the company in Des Moines, Iowa, before being transferred to the Kansas City, Missouri, office in 1982, where he was put in charge of appeals. He was offered a position in Washington, DC, in 1991; however, decided to retire from the company in May of that year. He then took a position at American AgrInsurance, a subsidiary of the Redland Corporation in Council Bluffs, Iowa, where he remained until his final retirement in June 2003.

John served as a member of the Shelby-Tennant School board for nine years and was board president for several years–as a result he presented high school diplomas to at least three of his children. He also served on the board of Concerned, Inc, Harlan, Iowa. John was a life-long member of the American Legion in Shelby, Iowa, and a member of St. Patrick’s Catholic Church, Neola, Iowa, throughout his adult life. John was also instrumental in bringing LeadWay Corporation to Shelby.

John and Helen moved to Shelby, Iowa, in 1984, where he resided until entering the Avoca Nursing Home in September 2009, following a debilitating fall.