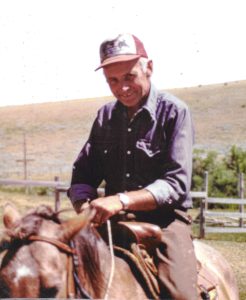 Keith Edwards passed away peacefully at his home on January 3, 2023.

Keith was born on March 11, 1925, in a farmhouse in Monroe Township, Shelby County, Iowa, to Leslie L. Edwards and Evalyn Vinding Edwards. He was the third of four sons.

Keith was raised on his family’s farm near Harlan, Iowa, and graduated from Harlan High School in 1943. On April 2, 1945, he was called upon to serve his country and joined the Army. After basic training, he was sent to the Pacific and eventually to occupied Japan during and post-World War II. He served in the Cannon Company in the 105th Regiment of the 27th Infantry Division. He was honorably discharged on November 30, 1946.

After his service, Keith moved to North Portal, Wyoming, to help his brothers Delbert and Howard on their homesteads, eventually getting his own homestead. He sold his property in Wyoming in 1966 and bought a ranch on Elbow Creek near Red Lodge, Montana. He raised sheep, red cattle, and horses until his retirement in 1999. He lived out his remaining days in the community of Red Lodge.

Keith took pride in his local community and rarely missed local sporting events. He could usually be found at the local coffee shop, storytelling with his favorite people. He enjoyed many adventures including: summiting Mount Fujiyama and skiing all the way up to his 85th birthday. He was a man of strong Christian faith.

A Celebration of Life with military honors has been planned for January 14, 2023, at the Luther Community Church near Red Lodge. Viewing starts at 10 am with a Service at 11 am. Food will be served at the fellowship hall following the service.

A burial is planned in Cuppy’s Grove, Iowa at a later date.

Keith’s family and friends would like to extend our deepest gratitude to his caretakers, Chris Bertolino and Tammy Barstad, for their last four years of service. They went above and beyond with their care and companionship for which we will always be grateful.