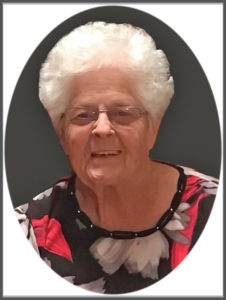 
Martha Ann Gross, the daughter of John Leo and Agnes Mary (Coppersmith) Stoll, was born on the family farm near Clyde, Missouri, on July 29, 1937, the tenth of 13 children. She received the sacraments of Baptism, Penance, Eucharist, Confirmation, and Matrimony at Immaculate Conception Basilica in Conception, Missouri. Martha attended Jefferson High School in Conception Jct., Missouri, where she played basketball and softball, and graduated with the Class of 1955.

On January 19, 1957, Martha married Gerald John Gross at Immaculate Conception Basilica in Conception, and the couple made their home north of Harlan, Iowa. Gerald first helped his father, and then he and Martha farmed south of Defiance, Iowa. They began farming their own land west of Irwin, Iowa, in 1966. Martha actively helped with farm work, kept a vegetable garden, canned and cooked for her family, and cared for their children. In 1997, Gerald and Martha moved into Irwin. Gerald died on February 27, 2015, in Omaha, Nebraska.

Martha was a member of St. Peter’s Catholic Church in Defiance, Iowa. She enjoyed playing cards, and loved spending time with her grandchildren and watching their sports. Martha and Gerald liked to travel, and visiting her Missouri family and friends was special to her.