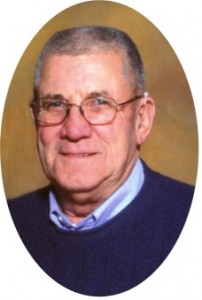 Knute David Andersen, the son of Nels and Stinne (Neilsen) Andersen, was born on September 26, 1934, in Anita, Iowa. He attended Shelby and Tennant (Iowa) schools, and graduated from the Shelby-Tennant High School in 1953. He was raised on the farm, and then farmed with his father and brother. From January 1955 through December 1956, David served in the U.S. Army.

On May 30, 1959, David married Dorothy Ruth Pitt at the Shelby Lutheran Church in Shelby. David continued to farm near Shelby, and he later farmed with his son, Richard. He also raised hogs and cattle for many years.

David was a member of the United Lutheran Church in Shelby, where he was active and was a member of the church council; he had also served as president. He had been a Shelby-Tennant school board member, serving as president of this group, as well. David was a member and former Commander of the Shelby AL Post #240. A proud Dane and an International Harvester “Red Man”, David was helpful to others and spoke his mind. He was a caring man who loved his family and work. David enjoyed bowling, playing cards, and traveling.