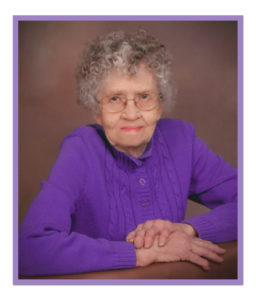 Norma Jean “Jeanie” Kiesel, the daughter of Louie and Ella (Henningsen) Plautz, was born on August 14, 1931, in Avoca, Iowa. She was baptized and confirmed at Trinity Lutheran Church in Avoca. Jeanie attended Pleasant Ridge #6 country school and graduated from Avoca High School in 1949. She then worked as a telephone operator in Avoca and Harlan, Iowa, until she married.

On May 6, 1951, Jeanie married Carl Adam Kiesel at Trinity Lutheran Church in Avoca. She was a stay-at-home mom until August 1973, when she began working at the Shelby Motel and later, at L&W Industries, Dairy Queen, and Tillie’s Café, all located in Shelby, Iowa. On October 1, 1987, Carl and Jeanie assumed management of the Shelby Mini Mart, and Jeanie continued in this position until her retirement in September 2006.

Jeanie joined the United Lutheran Church in Shelby, Iowa, in 1953, and was an active member, teaching Sunday School and Bible Class, and serving as church secretary. She was an organizer of the Girl Scouts in Shelby, and was also a 4-H leader. Family was immensely important to Jeanie, and she took much joy in organizing and hosting family holidays for many years. An excellent cook and baker, she will long be remembered for her delicious warm cinnamon rolls. When her children were young, Jeanie was an eager participant in their games. She loved camping, preferring to rough it with a tent and open campfire. She enjoyed listening to music from the 1950s, and was partial to Elvis tunes.

Norma J. “Jeanie” Kiesel died on Wednesday, August 17, 2022, at the Elm Crest Retirement Community in Harlan, Iowa. She had reached the age of 91 years and 3 days.

Jeanie was preceded in death by her parents; her husband, Carl Adam Kiesel, on February 21, 2007; one sister, Doylene Robertson; and one niece, Sharon Rae Campbell. She is lovingly remembered by her five children, Kerry (Delores) Kiesel of Atlantic, Iowa, Brian Kiesel of Omaha, Nebraska, Karla (Rich) Baird of Avoca, Iowa, Rick Kiesel of Shelby, Iowa, and Gale (Carrie) Kiesel of Avoca, Iowa; 14 grandchildren; 25 great-grandchildren; and other relatives and friends.