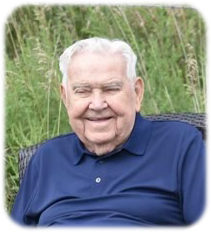 Glenn Norman Lee, the son of Bert William and Mildred Maria (Boysten) Lee, was born on January 7, 1928, in Madrid, Iowa. He graduated from Swaledale (Iowa) High School. He entered the United States Navy on January 3, 1951, and on December 30, 1951, married Phyllis Rae Bramsen at St. Paul’s Lutheran Church in Thornton, Iowa. Following his honorable discharge on November 15, 1954, Glenn continued the machinist career he began in the service by doing tool and die work. In 1978, Glenn and Phyllis moved to Shelby, Iowa, where they made their home.

Glenn was a member of the First Presbyterian Church in Shelby. He was also a longtime active member of the American Legion Post #240 in Shelby, and had attended the most recent meeting, held in June 2022. Glenn restored Farmall “H” tractors and one John Deere tractor with the assistance of his grandson, Cameron. He enjoyed fishing and hunting, and the couple spent several summers at the Cloud 9 Campground in West Plains, Missouri. Above all, Glenn loved spending time with his family, and especially treasured moments spent with his grandchildren, great-grandchildren, and great-great-grandchildren.