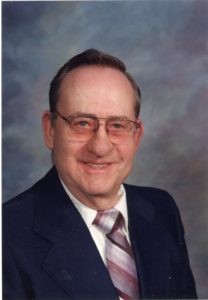 PRIVATE GRAVESIDE SERVICES WILL BE HELD AT A LATER DATE

Russell Elliott Campbell, the son of George and Ida (Leuke) Campbell, was born on November 21, 1929, on the family farm located in Lincoln Township, west of Harlan, Iowa. As an infant, he was baptized at the United Methodist Church in Harlan. Russell attended the Jackson Township #4 country school for seven years, and then went to Harlan High School. He began working as a farmhand, and served in the United States Army from 1951-53.

On September 29, 1956, Russell married Jo Ann Mary Ebert at St. Michael’s Catholic Church in Harlan. The couple lived in Idaho Springs, Colorado, for two years before returning to Harlan to make their home. It was there that Russell began doing maintenance work, primarily in the meat packing industry.

Russell and Jo Ann enjoyed working together making and selling ceramics at craft shows for over 15 years. Russell had a good sense of humor. During his younger years, he liked to hunt and fish.

A private graveside service will be held at the Harlan Cemetery, Harlan, Iowa. The Burmeister-Johannsen Funeral Home, Inc. in Harlan, Iowa, assisted the family with arrangements. Condolences may be left online at www.burmeisterjohannsen.com.