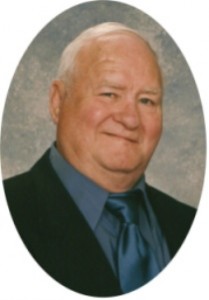 Charles “Chuck” Duane Fletcher, the son of Willard and Pansy (Hershey) Fletcher, was born on July 11, 1932, in Pillager, Minnesota. He attended school in Pillager and helped his father on the farm. Chuck entered the U.S. Air Force, and later reenlisted in the U.S. Army, serving until 1966. Following his time in the Service, he worked as a mechanic for Northwest Airlines, and then as a helicopter mechanic.

On May 8, 1978, Chuck married Leona Mae Heyes Paulson in Sioux Falls, South Dakota. Chuck then worked in retail sales until his retirement in 2002. He and Leona moved to Harlan, Iowa, in 1993, where they lived at the time of his death.

Chuck was a member of Abundant Life Church in Harlan, Iowa. He was also a member of the Helmer Reyelt American Legion Post #150 in Harlan. He loved God, his family, and his church family. Chuck enjoyed fishing, traveling, flower gardening, and playing cards, especially Five Hundred and Cribbage.
Charles D. Fletcher died on Saturday, May 15, 2010, at the Myrtue Medical Center in Harlan, Iowa, at the age of 77 years, 10 months, and 4 days.

Chuck was preceded in death by his parents, one brother, one son, and one great-granddaughter. He is survived by his wife, Leona Fletcher of Harlan, Iowa; four sons, Duane (Marge) Paulson of Murfreesboro, Tennessee, Charles (Mary Beth) Fletcher, Jr. and Wesley (Pam) Fletcher, both of Minneapolis, Minnesota, and Stephen (Martha) Fletcher of Merida, Mexico; three daughters, Cynthia (Lee) Huelle and Denise Fletcher, both of Tampa, Florida, and Dawn (Michael) Staskivige of Mora, Minnesota; two brothers, Jim Fletcher of Two Harbors, Minnesota, and Don (Betty) Fletcher of Brainerd, Minnesota; 22 grandchildren; six great-grandchildren; and other relatives and friends.
Funeral services were held on Saturday, May 22, 2010, at Abundant Life Church in Harlan, Iowa, with Pastor Jeff Erlemeier officiating. Pastor Rebecca Erlemeier and A.R. Carbonell served as musicians. Casket bearers were Ed Wehr, Dean Feser, Kevin Hanssen, Bill McDaniel, Russ Trierweiler, and Allen Leinen II. Burial was in the Harlan Cemetery in Harlan, Iowa, with the Helmer Reyelt A.L. Post #150 conducting military rites. The Burmeister-Johannsen Funeral Home in Harlan was in charge of the arrangements. Condolences may be left online at www.burmeisterjohannsen.com.