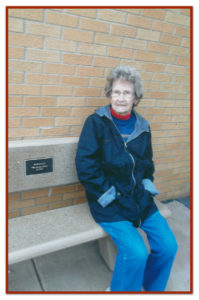 After working on the family farm and as a waitress, Aletha married Robert Dale Buck on February 15, 1947, in Council Bluffs, Iowa. They farmed north of Shelby, Iowa, and later moved into town in 1964 where they lived for the next 58 years in the old Kiesel place. Bob and Aletha had five children. Between raising children and helping farm their acreage, Aletha worked for Clarence Kiesel’s Trucking for 33 years.

Community service was very important to Aletha. She was a member of the Presbyterian Church, a P.W. member, the American Legion Auxiliary, Bridges and the Red Hat Society. Add to that being an integral part of the Senior Citizens Friendship Club selling poppies each year and volunteering on Election Days and you found one busy lady.

Aletha found a great deal of satisfaction helping others. She volunteered to work with the Bloodmobile, Bible School, Memorial Day activities and school reunions. In 1995, the American Legion Auxiliary decided to collect tabs to help buy supplies for the Ronald McDonald House. Aletha thought it would be “interesting” to count the tabs and so she did. Eventually the goal became 10 million. She reached it…and then some, just one of her many amazing accomplishments.

With everything she did Aletha still found time for her love of baking and collecting recipes. She always had a huge garden, sharing the bounty with neighbors and friends. And we can’t forget many a SkipBo game.

Aletha passed away peacefully in Shelby, Iowa, on June 2, 2022, at the age of 97 years, 5 months, 13 days. She was preceded in death by her husband Bob, shortly after their 71st wedding anniversary, her parents, brothers Glenn, Herman (who lost his life in World War II), and Eugene Staub, and one great-grandson.

The funeral service was held on Wednesday, June 8, 2022, at First Presbyterian Church in Shelby, Iowa. Dan and Irene Bertsch were the service officiants. Serving as musicians were Georgene Juhl, Deb Rosenow, Kathy Schumacher, and Sandi Fiandalo. Casket bearers were Brad Blum, Joel Wahling, Norm Bock, Larry Bladt, David Bladt, Roger Heilig, and Roger Paul. Burial was in the Shelby Cemetery, Shelby, Iowa. The Burmeister-Johannsen Funeral Home, Inc. in Shelby, Iowa, was in charge of the arrangements. Condolences may be left online at www.burmeisterjohannsen.com.