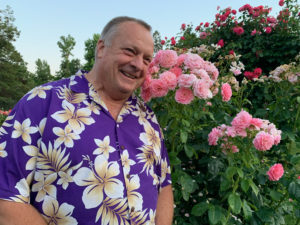 A MESSAGE FROM TOM’S FAMILY REGARDING MEMORIALS
Tom’s garden is in bloom, so please do not feel obligated to send flowers or plants. If you want to express your sympathies, please make a donation in Tom’s honor to the three  charities listed below and plant some flowers in your yard so you can enjoy them.
Wreaths Across America, P.O. Box 249, Columbia Falls, ME 04623  https://wreathsacrossamerica.org/pages/171491
Rebuilding Together South Sound, Tacoma, WA  https://rebuildingtogetherss.org/donate
Orphan Outreach, Plano, TX  https://orphanoutreach.org/restorehope

Tom Lehr was the most joyful man and left us far too soon.

The youngest of Franklin and Rosemary Lehr’s seven children, Tom was born November 7, 1961 and raised in San Diego, CA. He graduated from St. Augustine High School in 1979. Upon graduation, he entered bootcamp at Marine Corps Recruit Depot San Diego and served for 22 years, retiring in 2001 as a Gunnery Sergeant. During his years of service, he was stationed throughout the US and SE Asia.

In 1985 Tom had his first date with his wife-to-be Janet at the birthday party for a mutual friend’s 2 year old. After two years of dating, they married in 1987 at St. Rita’s Catholic Church in San Diego, CA. They celebrated 35 years of marriage in March 2022. Their first daughter, Rachel, was born in 1988. Their second daughter, Breann, was born in 1994. Breann married Bridger Schwasinger in 2017 and they welcomed their first child, Elliott Lehr Schwasinger in January 2022.

During his career as a Marine, Tom led students through Officer Basic School, Infantry Training School, and Corporals Course, and made amazing friends while on Recruiting Duty in Yuma, AZ. He played Marine Corps intramural football until his retirement and was known as the old man of the league. He held legendary barbeques for several hundred at a time, regularly practiced hospitality by welcoming Marines stationed far from family into his home for holidays, and was known for fiercely caring for his Marines and their families. He was a Marine’s Marine and regarded as a father figure for many within Fox Co 2/4 (2/9).

After retiring from the United States Marine Corps, he joined Schneider National as a cross country truck driver for the next 21 years and the family moved from Camp Pendleton, CA to Harlan, IA. During his driving career, he held many roles including training engineer for new drivers, assisting with annual in-house training, and facilitating deliveries for numerous national accounts as a valued partner of the Des Moines Operating Center. He would always take time to help another driver in a difficult situation or learn new skills.

In 2020, Tom was selected to drive the Freightliner Ride of Pride truck, which he named Fidelity. Through the Ride of Pride program in partnership with Wreaths Across America, he and Janet had the privilege to deliver wreaths from Maine to Arlington and Sarasota National Cemeteries to adorn the graves of those who served our country and remember and honor their lives. Spring 2022, Tom exceeded his goal of driving 2 million safe miles and was inducted into the “Haul of Fame” for 20 consecutive years of safe driving.

Tom dominated multiple categories in the County Fair flower competition on an annual basis. He was the King of Halloween, only scaring parents, never children. Even though he didn’t ride motorcycles, he helped to start a bike night called Roar into Harlan to bring people together.

Even though he couldn’t carry the bucket that carried the tune, Tom volunteered every year at All State Music auditions. He was a vocal supporter at his girl’s soccer games. He delighted in his son-in-law and grandson. He was the epitome of a girl dad – ready to go dress shopping, willing to follow their lead on any adventure, and finding time to write them notes and talk on the phone.

Most of all Tom loved life, family, food, gardening, reading historical markers/plaques, skipping through the grocery store, turning strangers into friends, and telling stories. Tom’s pride and joy was found in his daughters and later his son-in-law and grandson. He was ever present and excited to be with his kids, calling them funny names, and ready to hear about all that was happening in their lives. His kids encouraged him in his faith walk.

Tom’s wife, Janet, was the love of his life, his partner in every up and down, and as he said, “the cream of my heart.” Tom and Janet were inseparable. Even while Tom’s careers had him away physically, he and Janet would talk nonstop as if she was always right there with him. Tom could not be Tom without his Janet.

Thomas Lehr died on Thursday, May 5, 2022, at Unity Point Health – Iowa Methodist Medical Center in Des Moines, Iowa. He had reached the age of 60 years, 5 months, and 28 days.

The Memorial Service was held on Monday, May 16, 2022, at the Veteran’s Memorial Auditorium in Harlan, Iowa, with Pastor Keith Dollar of City Church Garland, Garland, Texas, leading the service. April Taggs and Hannah Early Gerjol served as musicians, and the eulogist was Tom’s son-in-law, Bridger Schwasinger. Special speakers included Tom’s daughters, Breann Schwasinger and Rachel Lehr, and Tom’s mentor, Sergeant Major Jay Lott, USMC (Ret.). The United States Marine Corps conducted military rites and presentation of the flag. Tom’s garden is in bloom, so please do not feel obligated to send flowers or plants. If you want to express your sympathies, please make a donation in Tom’s honor to the three charities listed below and plant some flowers in your yard so you can enjoy them. Memorial donations may be made to Wreaths Across America (P.O. Box 249, Columbia Falls, ME 04623), Rebuilding Together South Sound, Tacoma, WA (https://rebuildingtogetherss.org/donate), or Orphan Outreach, Plano, TX (https://orphanoutreach.org/restorehope). Burmeister-Johannsen Funeral Home, Inc., Harlan, Iowa, assisted the family with arrangements. Condolences may be left online at www.burmeisterjohannsen.com.