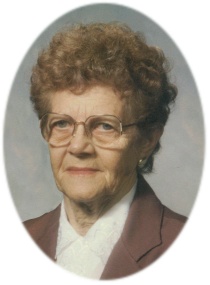 Alice Christine Steckelberg, the daughter of Hans Peter and Anna (Frees) Petersen, was born on January 24, 1919, in rural Irwin, Iowa. She attended Polk Township Country School through the eighth grade, and then worked as a hired girl for area farmers. On October 20, 1943, Alice married Robert Max Steckelberg at St. Paul’s Lutheran Church in Irwin. The couple farmed near Irwin until their retirement in 1983, when they bought a home in Harlan, Iowa. Until February, 2000, Alice and Robert did lawn work and snow removal for others. Robert died on August 24, 2005, in Harlan, Iowa.

Alice was a member of St. Paul’s Lutheran Church in Irwin, Iowa, where she was a member of the woman’s group ALCW. She enjoyed baking, sewing, embroidering, and tending her vegetable garden. Alice also did a lot of canning.

Funeral services were held on Thursday, June 24, 2010, at St. Paul’s Lutheran Church in Irwin, Iowa, with Pastor Ron Rasmussen officiating. Ruth Ann Barry served as the organist and Pastor Rasmussen was the soloist. Casket bearers were Mark Klein, Daniel Klein, Melissa Wilson, Jennifer Klein, Brian Steckelberg, and Michael Wilson. Burial was in the Oak Hill Cemetery in Irwin, Iowa. The Burmeister-Johannsen Funeral Home in Harlan was in charge of the arrangements. Condolences may be left online at www.burmeisterjohannsen.com.