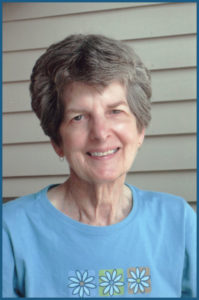 Beverly “Bev” Ann Burmeister, the daughter of Homer and Lois (Eckels) Medsker, was born on July 4. 1942, in Graham, Missouri. She was baptized at the Graham Methodist Church. After high school, Bev attended Northwest Missouri State University in Maryville, Missouri, where she received her degree in Elementary Education.

On June 6, 1965, Bev married Jon Jay Burmeister at Immanuel Lutheran Church in Harlan, Iowa, and the couple made their home in Harlan. Bev then began her career in education at Laurel and New Park Schools in Harlan, where she had the privilege of teaching mostly first graders for over 30 years before retiring. Bev also supported Jon’s position as owner/operator of Burmeister Funeral Home, and her calligraphy work lent a personal touch to many register books through the years.

Bev was a member of Immanuel Lutheran Church in Harlan, Iowa, as well as various other community organizations. She was actively involved in the local school’s Plant A Tree Arbor Day program, and her love of gardening fostered her long-held pastime of drying flowers for later enjoyment. Bev was a strong supporter of the Harlan Community Public Library. She also liked to spend time quilting and was known to be a good cook who could bake a great pie and make tasty pizza for her grandsons. Bev truly treasured time spent with friends and family, often attending her grandsons’ school activities, and other school, church, and community music programs.

Preceding Bev in death were her parents, and her husband Jon Jay Burmeister, on March 9, 2021, in Harlan, Iowa. She is lovingly remembered by one son, Seth (Kimberly) Burmeister, and two grandsons, Tate Burmeister and Tanner Burmeister, all of Omaha, Nebraska; two brothers, William Medsker and Max (Janet) Medsker, both of Graham, Missouri; and other relatives and many friends.

Public visitation was held on Tuesday, February 15, 2022, at Burmeister-Johannsen Funeral Home, Harlan, Iowa. Private funeral and graveside services were also held, with Pastor Phil Nielsen of Immanuel Lutheran Church, Harlan, officiating and serving as the musician. Bev’s loving family members were her casket bearers. Burial was in the Harlan Cemetery, Harlan, Iowa. The Burmeister-Johannsen Funeral Home, Inc., Harlan, Iowa, was in charge of the arrangements. Condolences may be left online at www.burmeisterjohannsen.com.

This entry was posted in Obituaries and tagged Obit. Bookmark the permalink.