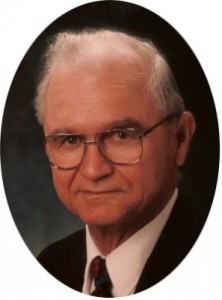 Dale Juelsgaard, the son of Hans and Alma (Jensen) Juelsgaard, was born on February 9, 1923, on the family farm west of Elk Horn, Iowa. He attended country school and one year of high school in Harlan, Iowa. Dale then began farming with his father. On January 6, 1946, he married Myrtle Irene Lange at the Lutheran Parsonage in Elk Horn, Iowa. The couple farmed in Audubon and Shelby County until 1998, when they moved into Elk Horn. Dale became a resident of the Salem Lutheran Home in Elk Horn in May, 2009.

Dale was a member of the Elk Horn Lutheran Church in Elk Horn, where he served on the church council. He was also a member of the Elk Horn School Board and the Marne Telephone Cooperative Board. He enjoyed farming and was an active conservationist. Dale liked to pass the time by reading history, specifically about World War II, as well as westerns. He liked antique John Deere equipment, watching John Wayne movies, and dancing.

Dale Juelsgaard died on Saturday, July 10, 2010, at Myrtue Memorial Hospital in Harlan, Iowa, having reached the age of 87 years, 5 months, and 1 day.

Funeral services were held on Thursday, July 15, 2010, at the Elk Horn Lutheran Church in Elk Horn, Iowa, with Pastor Keith Menter officiating. Nancy Watson served as the organist and Jeni DePue was the soloist. Casket bearers were Patty Bauer, Jeni DePue, Cindy Hanson, Jeremy Fischer, Dave Juelsgaard, Marty Juelsgaard, Colton Juelsgaard, and Brenna Juelsgaard. Burial was in the Elk Horn Lutheran Cemetery in Elk Horn, Iowa. The Burmeister-Johannsen Funeral Home in Harlan was in charge of the arrangements. Condolences may be left online at www.burmeisterjohannsen.com.