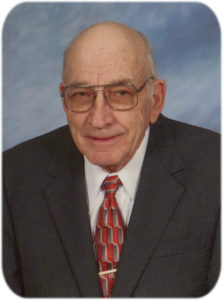 Lowell Ivan Howe, the son of Claude and Blanche M. (Brock) Howe, was born on January 15, 1929, in Defiance, Iowa. He attended Shelby (Iowa) High School, and graduated with the Class of 1947. On March 22, 1951, Lowell entered the United States Army, and served in Korea. He attained the rank of Corporal before he received his Honorable Discharge on December 22, 1952.

Lowell married Bernice Joy Christensen on August 3, 1957, at Immanuel Lutheran Church, Harlan, Iowa. The couple began farming northeast of Shelby before relocating to their farm home southeast of Kirkman, Iowa. Although Lowell was primarily engaged in farming during his lifetime, he had also worked as a welder for Jacobs Tools in Harlan, and had done car windshield repair. In recent years, Lowell had made his home in Marengo, Iowa, to be near family.

Lowell was an active member of Immanuel Lutheran Church in Harlan, where he had served as a Deacon. After his move to Marengo, he worshiped at Cornerstone Church in rural Millersburg, Iowa. Lowell had been a member of the Botna Valley Angus Association. For the past 12 years, he served as a volunteer at KSKB Christian Radio, Brooklyn, Iowa. Lowell enjoyed restoring and using antique tractors, and especially liked to work with Minneapolis Moline tractors and his own H Farmall. He found music to be entertaining, and took pleasure in playing the harmonica.