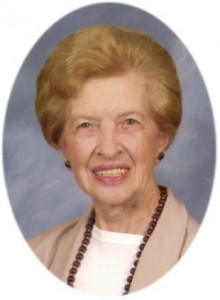 Carol Mae Rixen, the daughter of Ralph Waldo and Carolene Mathilda (Jensen) Channon, was born on May 10, 1923, in rural Exira, Iowa. She graduated from Exira High School in 1941 and moved to Harlan, Iowa, to live with her sister, Marie. On July 9, 1944, Carol married Glen Dale Rixen in Harlan. Carol worked at several area businesses, including Variety Distributors, where she was a bookkeeper. She then served as the Shelby County (Iowa) Deputy Auditor for more than twenty years. Following her retirement, she worked as the church secretary at the Congregational United Church of Christ in Harlan. Glen died on April 17, 2004, and in 2005, Carol moved to the Avoca Nursing and Rehab Center.

Carol was a member of the Congregational United Church of Christ in Harlan and the Order of Eastern Star Lebanon Chapter #8 of Harlan. She loved to read and dance, and enjoyed riding in Glen’s MG Classic British car. Carol also participated in Masonic and Shrine events with her husband.

Carol was preceded in death by her parents; her husband, Glen Rixen; and two sisters, Marie Mushrush and Thelma Sampson. She is survived by one son, Steven (Kimberly) Rixen of Shoreview, Minnesota; one daughter, Elizabeth A. Rixen of Olathe, Kansas; two grandchildren, Matt (Laura) Rixen of Ridgeland, Wisconsin, and Kris Rixen of Hudson, Wisconsin; two great-grandchildren, Elena Rixen and Aubin Rixen; and other relatives and friends.

Funeral services were held on Friday, July 23, 2010, at the Congregational United Church of Christ in Harlan, Iowa, with Rev. Donna Ewert officiating. Freda Boeck served as the organist, and Ron and Carol Moon were the vocalists. Honorary casket bearers were Frank “Rusty” Wirth, Lois Wirth, Mike Goetz, Elaine Goetz, Carolyn Spearing, and Carroll Sampson. Casket bearers were Bob Sampson, Kris Rixen, Matt Rixen , Jim Sampson, Jim Rixen, Jaime Obrecht, and Jeff Obrecht. Burial was in the Harlan Cemetery in Harlan, Iowa. The Burmeister-Johannsen Funeral Home in Harlan was in charge of the arrangements. Condolences may be left online at www.burmeisterjohannsen.com.