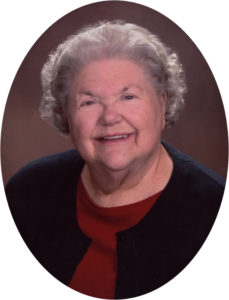 
Beverly Rae (Hauptman) Dea was born on a farm near Julian in Otoe County, Nebraska, on August 31, 1930. She was the daughter of Herman Ray and Marie Cecilia (O’Neil) Hauptman and was the youngest of six children. She was raised in the Julian and Peru, Nebraska, communities and attended elementary school in Peru, Nebraska. Beverly then attended Fairview White High School in Dayton, Ohio, graduating on June 16, 1947. She was attending Peru State Teachers College where she met her future husband, Donald Joseph Dea, at a Valentine’s Day dance. They were married April 16, 1951, in Dayton, Ohio, and to this union 12 children were born.

Until the children came along, Beverly worked as a clerk at Wright-Patterson Air Force Base in Dayton, Ohio, while Don was stationed in Iceland. She then followed her husband as he served in various Air Force assignments in Massachusetts, Illinois, Mississippi and Texas.

In 1957, the family returned to the Shelby area where Beverly worked tirelessly on the family farm raising 12 children, keeping them clothed and fed. She spent countless hours cooking, gardening, canning, and sewing as she dedicated her time to her family. Beverly joined the Catholic Church in 1951, and was a member of St. Mary’s Catholic Church in Avoca, Iowa.

Mass of Christian Burial was held on Friday, December 31, 2021, at St. Mary’s Catholic Church in Avoca, Iowa, with Father Seth Owusu celebrating. Elizabeth Schechinger was the Eucharistic Minister, and Hannah Dea and other family members served as musicians. Teresa Dea was the lector, and Peter Dea and Joseph Dea were the servers. Casket bearers were Jake Dea, Autumn Dea, Taylor Tuel, Tate Purviance, Kielan Dittmar, and Justin Schechinger. Burial was in Graceland Cemetery, Avoca, Iowa. The Burmeister-Johannsen Funeral Home in Shelby, Iowa, was in charge of the arrangements. Condolences may be left online at www.burmeisterjohannsen.com.