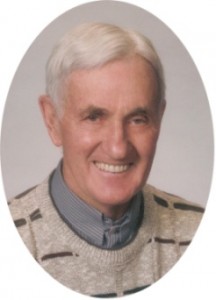 Dwayne Arland Barry, the son of Ransome and Gertrude (Smith) Barry, was born on September 22, 1925, on a farm west of Woodbine, Iowa. He attended country school near Woodbine until the family moved to a farm three miles west of Irwin, Iowa, in 1936. After moving to Irwin, Dwayne went to country school in Greely Township until the eighth grade. He then attended Irwin High School where he graduated in 1943. Dwayne was active in band and basketball, and also worked on his family’s farm and several neighborhood farms during high school. Immediately following graduation, Dwayne enlisted in the United States Navy and served on LST 457 in the South Pacific, including New Guinea, Philippines, and Australia. After his discharge from the US Navy in 1946, Dwayne returned to Irwin to begin farming.

On December 30, 1948, he married Marian T. Coenen of Defiance, Iowa, at St. Peter’s Catholic Church in Defiance. The couple farmed until their retirement in 1987. After the death of his beloved wife, Marian, on December 16, 2000, Dwayne remained on the farm. In December, 2007, he became a resident of the Little Flower Haven in Earling, Iowa.

Dwayne was a member of St. Peter’s Catholic Church in Defiance, Iowa, until the early 1980s when he transferred his membership to St. Michael’s Catholic Church in Harlan, Iowa. He loved farming, and raising cattle kept him busy as he traveled to western Nebraska to buy stock and to the stockyards in Omaha, Nebraska, to sell the livestock. Following retirement, Dwayne continued to work in his yard and garden. In later years, he and Marian enjoyed area dances and became good friends with many couples throughout western Iowa.

Dwayne was preceded in death by his parents; his wife, Marian Barry; one brother, Owen Barry; and one grandson, Dennis Heinrichs, Jr. He is survived by one son, Steven Barry of Defiance, Iowa; two daughters, Gail (Dennis) Heinrichs of Auburn, Iowa, and Janet (Wade) Mintz of Henderson, Nevada; one sister, Dorothy (Bill) Shannon of Harlan, Iowa; one brother, Milton (Ruth Ann) Barry of Irwin, Iowa; three grandchildren; six great-grandchildren; and other relatives and friends.

Mass of Christian Burial was held on Thursday, August 19, 2010, at St. Michael’s Catholic Church in Harlan, Iowa, with Father John Frost celebrating. Kate Kohorst and Maryalyce Dotzler served as musicians. Casket bearers were Pat Barry, Wade Mintz, Dennis Heinrichs, Matt Heinrichs, Steven Summers, and Rod Shannon. Burial was in the Harlan Cemetery in Harlan, Iowa. The Burmeister-Johannsen Funeral Home in Harlan was in charge of the arrangements. Condolences may be left online at www.burmeisterjohannsen.com.