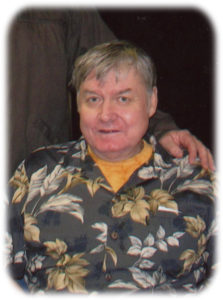 PRIVATE GRAVESIDE SERVICES WILL BE HELD


Stephen James “Steve” Peterson was born on November 20, 1949, in Cedar Rapids, Iowa, to Richard Carl and Beverly Lucille (Namen) Peterson. He was baptized and confirmed at the Elk Horn (Iowa) Lutheran Church. A member of the Class of 1968, Steve graduated from Elk Horn-Kimballton High School after winning honors at the state wrestling tournament.

Steve proudly served in both the United States Army Green Berets and the United States Navy. Following his honorable discharge, he began working as a machinist in the medical equipment industry. Steve worked in this profession for many years until his retirement ten years ago. He then made his home in Elk Horn, and in April 2021, he became a resident of the Salem Lutheran Home.

Steve liked to read and study foreign languages; he especially enjoyed reading the Bible in other languages.

Steve was preceded in death by his grandparents and his stepfather, Ed Larsen. He is survived by his mother, Bev Larsen of Elk Horn, Iowa; four sisters, Christine Jensen of Boise, Idaho, Rachel (Randy) Birks of Irwin, Iowa, Linda (Roger) Jensen of Atlantic, Iowa, and Marcia (Terry) Nelson of Kimballton, Iowa; nieces and nephews; and other relatives and friends.

A private graveside service and burial of ashes was held at the Elk Horn Lutheran Cemetery, Elk Horn, Iowa. Kathy Soetmelk, Director of Pastoral Services at Salem Lutheran Home, and Kathi Ondracek, Myrtue Hospice Chaplain, conducted the service. Memorials may be directed to the Salem Lutheran Home or the Exira-Elk Horn-Kimballton School wrestling program. Burmeister-Johannsen Funeral Home, Inc., in Harlan, Iowa, was in charge of the arrangements. Condolences may be left online at www.burmeisterjohannsen.com.