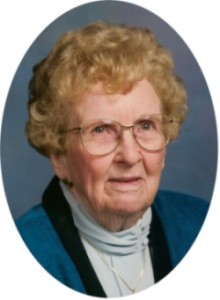 Twyla Ella Schnack, the daughter of Lewis August and Leila Edith (Albright) Kullbom, was born on September 25, 1914, on a farm near Oakland, Iowa. Her parents farmed near Oakland, Harlan, and Tennant, Iowa. Twyla was homeschooled through the third grade, when she began attending public school; she graduated from Tennant High School in 1931.

Twyla met Alvin John Schnack during high school, and they were married on January 29, 1936, at the Methodist Parsonage in Harlan, Iowa. For many years, the couple farmed southwest of Harlan. In 1965, Twyla received the Shelby County Homemaker Award from the Harlan Chamber of Commerce. The couple moved into Harlan in October, 1990, and in 2002, Twyla became a resident of the Elm Crest Retirement Community in Harlan. On May 10, 2010, Twyla moved to the Salem Lutheran Home in Elk Horn, Iowa.

Twyla was a member of Immanuel Lutheran Church in Harlan, Iowa, where she taught Sunday School and Bible School, was a Circle leader, and did mission quilting. She was a member of the Zenobia Rebekah Lodge #286 and was a past Noble Grand. While young, Twyla was active in 4-H and she later served as a leader for the Lincoln Bluebirds 4-H club. Twyla was also a member of the SI (Self-Improvement) Club, the CW (Cheerful Workers) Community Club, and she formed an Extension knitting club. Twyla enjoyed sewing, knitting, quilting, and vegetable and fruit gardening. She especially loved spending time with her family.

Twyla was preceded in death by her parents; her husband, Alvin John Schnack, on January 15, 1997; two brothers, Vernon Kullbom and Delbert Kullbom; and one great-grandchild, Victoria Schnack. She is survived by three sons, Larry (Carol) Schnack of Eau Claire, Wisconsin, Vernon Schnack of Harlan, Iowa, and Charles (Judy) Schnack of Panora, Iowa; one daughter, Charlene (Judd) Freeman of Silverthorne, Colorado; 13 grandchildren; 33 great-grandchildren; seven great-great-grandchildren; and other relatives and friends.