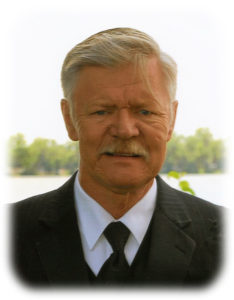 Francis “Frank” Xavier Dargy, the son of Francis Xavier and Helen Margaret (Stoll) Dargy, was born on January 23, 1946, in Omaha, Nebraska. He graduated from high school in 1964 in Chicago, Illinois. Frank proudly served in the United States Army from October 22, 1965-July 7, 1966. He then began working with Chicago & North Western Railroad, and was later employed as a clerk with Union Pacific Railroad.

For ten years, Frank lived with his three youngest children in Harlan, Iowa. Due to poor health, he had most recently been a resident of the Heritage House in Atlantic, Iowa.

Frank was a member of the Atlantic Evangelical Free Church in Atlantic, Iowa. He was also a former member of the Brotherhood of Railway and Steamship Clerks Union. Frank enjoyed collecting railroad items, and studying history and Native American culture. He loved nature and liked to spend time fishing.

Frank was preceded in death by his parents, and one infant granddaughter, Grace Dargy. He is survived by three sons, Glen (Tracy) Dargy of Shellsburg, Iowa, Chad (Brandi) Dargy of Omaha, Nebraska, and Nicholas Dargy of Bellevue, Nebraska; two daughters, Marissa (Dominic) Marketto and Margaret Dargy, both of Las Cruces, New Mexico; one sister, Mary Helen (Julio) Weiss of Loves Park, Illinois; 11 grandchildren; one great-grandchild; and other relatives and friends.

A memorial service was held on Friday, September 10, 2021, at Burmeister-Johannsen Funeral Home in Harlan, Iowa, with Pastor Jon Benson of St. John Lutheran Church, Council Bluffs, Iowa, officiating. Burial of ashes will be held at a later date in the Iowa Veteran’s Cemetery, Adel, Iowa. The Burmeister-Johannsen Funeral Home, Inc., in Harlan, Iowa, was in charge of the arrangements. Condolences may be left online at www.burmeisterjohannsen.com.